How do urban ecosystems recover from environmental disasters? Answering this question requires the bridging of social science and ecological research—the goal of the Socio-Ecological Movements in Urban Ecosystems (MOVE) project led by Dr. Henrik Ernstson. This project studies how urban civic organizations engage local green areas, such as protecting and rehabilitating wetlands, urban farming, and tree planting, to produce ecological changes. The project has many components involving both social and ecological science teams studying areas in South Africa (Cape Town) and the United States (New Orleans, Louisiana), with additional plans to add future sites as well. I joined the social science team in South Africa in 2012. This fall, we had the first combined meeting of the social science and ecological teams for both South Africa and the U.S.

In my portion of the MOVE project, referred to as the Civic Network Study, we interviewed representatives of Cape Town organizations and asked them about how their groups mobilized around green spaces. For example, some groups organized to protect the hiking trails on a nearby mountain; some worked to improve water quality in nearby wells or streams; and others had broader missions of social justice with many different campaigns. We are also studying the networks formed when these organizations collaborate with each other and how ties between organizations with similar goals, tactics, ideological platforms, etc. relate to their perceptions of success. The ecological team gathered information on the types of plants and animals present in a sampling of areas around Cape Town that included many of the sites mentioned by the organizations surveyed by the social science team. They want to see how much impact these groups have had and what the different recovery or improvement processes look like around the city.

The purpose of our meeting in New Orleans was to have the social and ecological teams from Cape Town discuss their data sets and initial findings together, as well as to speak with the teams based in New Orleans about their project, where data collection is currently underway. On the first day of the meeting, Dr. Joshua Lewis, project leader of the New Orleans teams and a native of the city, led a field trip around the area. He called attention to the interplay between social and environmental forces within the city, and how continuous feedback loops between those forces have shaped the city. For example, we saw where soil displacement due to water traffic has alternately shored up land around private homes in some areas but aided erosion in others (like the lower 9th ward that was so devastated by Hurricane Katrina).

The quote that stayed with me throughout that first day was that New Orleans is “the inevitable city in the impossible location.” Social and economic forces demanded a stronghold at the gateway to the Mississippi River, which made the land the inevitable site for a city, but the “impossible” physicality of the location has had a constant impact on the nature of its growth. This description was driven home when we saw the area of the Mississippi River Gulf Outlet (MRGO) levee that collapsed during Hurricane Katrina (below photo). 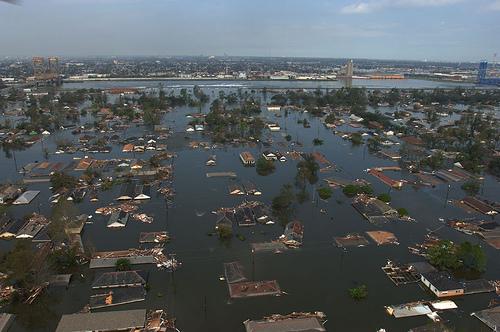 Some houses, destroyed by the flood that resulted from the levee breach, are being rebuilt in the same location as before—steps from the levee. One example are the homes from Brad Pitt’s Make It Right project just to the east of the Claiborne Ave Bridge. These homes have been at the center of controversy because this part of the 9th Ward is still vulnerable to flooding, and initially these houses cost approximately $400,000 each (below photo). 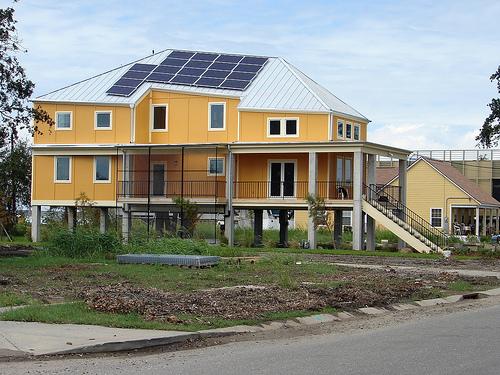 We also visited the now almost-destroyed cypress forest of Bayou Bienvenue. The photo below shows the forest today—almost entirely open water—but before the construction of the MRGO in the 1960s, this was a thriving freshwater forest. The introduction of saltwater through the MRGO starting in the 1970s destroyed the ecosystem and made the lower 9th ward, the eastern edge of which was built on dredged swampland, even more vulnerable to flooding. (For more info and restoration projects, click here.) The day was capped off by watching the new documentary MRGOing, Going, Gone? The filmmakers began filming this documentary about the Gulf Outlet in 2003, but kept filming for years afterwards due to Hurricane Katrina and its devastation. The consequences of the Hurricane were greatly intensified by the prior damage the MRGO had done to the New Orleans coastline. The filmmakers caught predictions of such devastation on tape years before Katrina struck, and they cogently showed how the construction of the MRGO set the conditions for a disaster like Katrina because large residential populations were positioned on increasingly vulnerable soil. 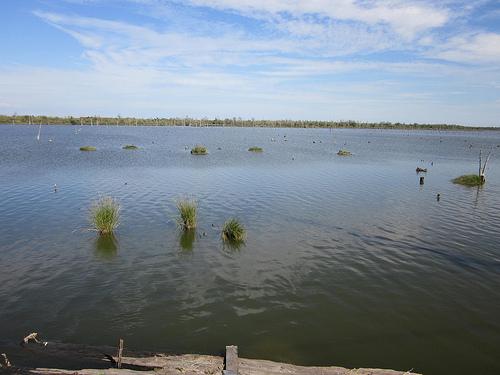 Touring these areas gave the Cape Town teams some background into the New Orleans case. The two teams then discusses parallels in the history of the two cities: both are port towns; both are a melting pot of native populations, colonialists, and immigrants; and both have witnessed recent massive ecological upheaval. The South Africa teams (both social and ecological) tried to impart some lessons from the data gathering that has gone on in Cape Town to help plan for data collection in New Orleans.

The second day focused on the data our project teams have collected on social movement organizations and area plants and animals in Cape Town, South Africa. The social science team (Henrik Ernstson, Mario Diani, and me) hadn’t all met since designing the survey a year prior. Now that we had the data in hand, we needed to inspect it for errors and clean (i.e., remove duplicates among) the list of organizations mentioned. Cleaning the civic networks dataset was an especially challenging undertaking with 120 surveys ranging from 1–2 hours in length. After we finished cleaning, we identified 1,005 unique organizations including those interviewed, and identified a target set of organizations that were central in these original networks (meaning they were mentioned by three or more other interviews) for interviews in the second wave that will start soon.

This cleaning process took us much longer than the meeting in New Orleans, but it is now completed. We’re waiting for our colleagues to finish up the last few interviews, and then we will start the analyses. We plan to present findings at the 7th annual Political Networks conference at McGill University in May 2014. Hopefully, we’ll be able to compare our findings to those of the New Orleans group shortly thereafter.