A Q&A with Dr. Mary Collins

In a sense, the motivation for Dr. Mary Collins’ research can be characterized by a single question: “How do they get away with it?”

As a postdoctoral fellow at SESYNC, Mary examines the magnitude and distribution of pollution from individual industry producers across the United States. With support from SESYNC Director of Cyberinfrastructure Joseph JaJa and SESYNC Scientific Programmer Ian Muñoz, she is developing a national-level disproportionality analysis and visualization that she hopes will help identify ways to address “the inequality that we all know exists.”

You’ve said that you’re interested in “how the winners win and how the losers lose.” Who are the winners, and who are the losers?
Within in the context of my current project, the winners are the small groups of people, facilities, or organized interests who generate the vast majority of industrially-based harm, while escaping scrutiny from regulators or the public. The losers—who are likely communities of color and/or those who live in poverty—are the neighborhoods that bear more than their fair share of environmental harm across the United States.

How does the concept of environmental inequality relate to the winner–loser scenario?
Unavoidably, industrial activities create externalities—harmful effects such as air, land, and water pollution—and I’m interested in how these problems are created and where they are likely to end up. It’s my hunch that, in a society characterized by economic and racial equality, producers would be more likely to care about where externalities end up because the producers themselves might have to deal with them. Simply, if the dump is in your own backyard, you’re probably less likely to tolerate it. On the other hand, in a society characterized by inequality, producers may have an easier time transferring externalities to other groups, which, in my work, are groups with less power or lower social capital, and are likely people of color or those living in poverty. I’m interested in how this “transfer” happens.

This is just one idea—there are, of course, many hypotheses that attempt to explain the unequal distribution of environmental harm. But when I show, over and over again, that tiny minorities of producers create the vast majority of harm, I can’t help but think, “Why is this okay? Why does this seem to escape scrutiny?”

What do you personally find most important about your work?
My master’s advisor told me a story about working in an environmental justice community in Ft. Lauderdale. The shore of Ft. Lauderdale is really wealthy—there are huge houses on the canals and on the coastline. If you go inland a little bit, there’s an African American community that lives right next to a hazardous waste incinerator. My advisor was interviewing an African American woman who mentioned that her grandchildren would play in the snow. But they live in Florida—it doesn’t snow there. The thing is, they would play in the ashes that rained down from the facility when it was in operation—and unfortunately, several of the kids got cancer.

When dealing with the resultant dispute, a community matriarch said, “I don’t understand why this facility is here. Why can’t we just take all of this stuff and shovel it into the Everglades? Nobody lives there.”

This has been a guiding statement for me. If incinerated waste was shoveled into Everglades National Park, there would be groups lined up out the wazoo to protect the space. But when this lady’s children were dying, there was no one there to say that her family mattered. Clearly, both the Everglades and this woman’s family deserve protection. But I felt like it was a failure to let this woman’s kids die—this didn’t need to happen.

The best part about the work that I do is that it’s solution-oriented. If you can explain what’s going on, then you might be able to use the knowledge to do a lot of good for the environment and for the people who need it most, too.

What’s the coolest thing about your work?
Oh man, I don’t think this is going to be “cool.” I like data stuff. I like learning about how things fit together. And I like that we live in a place where you call up the government, and they give you terabytes of free information without too much trouble. I’ve always liked puzzles—when I’m at work and doing these types of analyses, I get to keep digging until I feel like I’ve dug enough to justify going bed at the end of the day. I never seem to run out of energy to keep digging. The puzzle aspect of my work is what keeps me hooked. Of course, I also find the topic fascinating, which helps.

What do you enjoy most about working at SESYNC?
The creativity that goes into collaborating with Joseph and Ian, which involves working across disciplines that are vastly different. This is the first time I’ve been in a collaborative situation where I feel like we’re all equals with very different skill sets. For example, we don’t divvy up the work and say, “You do this, I’ll do that, and we’ll just get it done.” In reality, I can’t do what Joseph does. Joseph can’t do what Ian does. Ian can’t do what I do, etc. We all work together, check each other, and trust each other. Despite the fact that words like ‘performativity’ and ‘racism’ exist in my discipline and probably don’t even enter the lexicon of Joseph and Ian’s disciplines, we are able to come together and create something really exciting and meaningful.

What about your field of environmental sociology do you think would surprise people the most?
That sociology is a science at all. People often think of “science” as a laboratory activity and a place where smart people in white coats work in a controlled setting. My science is the science of society; I use a scientific method (and lots and lots of data!) to study the questions I am interested in.

What’s your least favorite science word?
Definitely something like “fecal.” 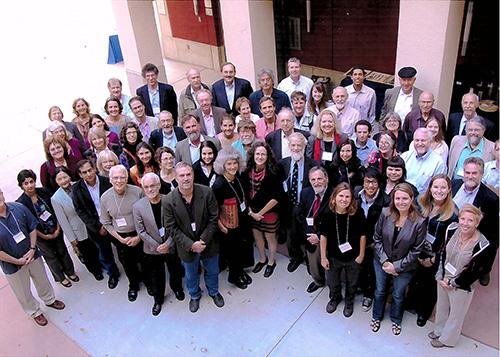 If you could save one thing from your burning office, what would it be?
My knee-jerk reaction would be to grab this picture (above) I have taped to my office wall. It’s of most of the people in my field. It’s a small group—we all fit in one picture. It was taken at maybe the last big gathering that my late mentor, Bill Freudenburg, attended—it was a celebration of his work and his life. All his friends showed up in Santa Barbara, and he was totally in his element. It was a day to focus on his life and work, rather than the cancer he was then fighting. He really changed my life and my thinking—although I’m on my own now, everything I write comes from some place within me that he helped create. I like having the photo because it reminds me of that day and of the community that I’m part of.

What profession other than your own would you like to attempt?
It took me a long time to find this profession, and I’m happy doing what I do. But if I could be anything, and it could really happen, I’d want to be a pro athlete.

What kind of athlete?
A really awesome one.

Learn more about Mary by visiting her profile here.