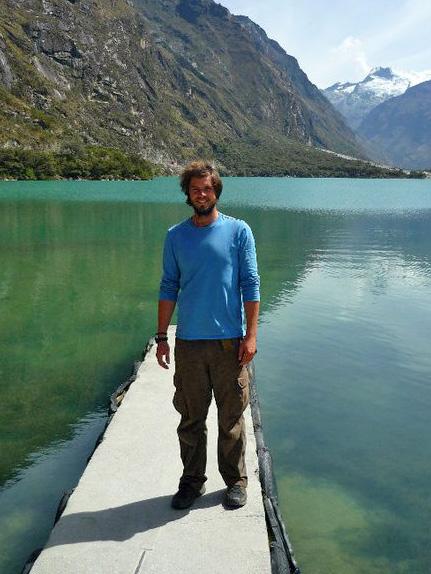 How would you describe your primary field of study?

What inspired you to choose this field of study?

I grew up in Cape Town, which is a city with mega-diverse ecosystems on its doorstep. As kids, my parents always encouraged my brother and me to explore the outdoors. And my gran was a botanical artist, and my grandfather a mining geologist—so a lot of our childhood was spent picking flowers and picking up rocks and trying to find fossils on the weekends.

And then I actually quit biology in high school. I spent a lot of my first year of high school biology in trouble for not coloring in pictures of cell organelles correctly—evolution was only introduced into the South African curriculum in 2008. I initially registered for a business degree at university as a result of all of that, but took a year off to travel before starting and then switched to geography, which meant that I had to complete a required biology course. I went so far as to go to the dean of the science faculty and said, look here; me and biology, we just don’t get on. Please give me an exemption. And they refused. But I ended up in the classroom of the most wonderful, Father Christmas-like marine biologist named George Branch. He taught the diversity of life as a six-month course, and I was hooked. It was all about the cool outdoor stuff I did between the ages of 3 and 13, but formalized in a university and research setting. So I switched my major again to ecology, and here I am.

Can you briefly describe your proposed SESYNC postdoctoral project?

Modern ecology as a science has been around for a couple of centuries, and typically ecologists have sought out the most wild places on the planet with the least amount of human disturbance to figure out how nature works. But more than half of humanity now lives in cities, and many people’s first interactions with nature will be in urban settings. It’s becoming increasingly clear to ecologists that if we’re going to understand nature in a way that is relevant to the everyday experience of lots of people, we need to understand how it works in an urban environment.

So a large part of my postdoc will be trying to understand how much of the biodiversity in cities is structured by the environmental factors we typically think about when doing ecology in wild places (such as climate), and how much of it is structured by human’s cultural and socio-economic preferences in an urban landscape (for example, planting grass lawns in a Phoenix, Arizona or other desert environment).

Why is SESYNC the right place to undertake this research?

I’ll be using many different datasets from household economic surveys to US census data to more traditional ecological surveys on phylogeny and life history. SESYNC has a lot of in-house expertise in the practice of utilizing existing datasets from very diverse sources, which will help me make the most of these data. It’s the kind of expertise that’s difficult to find in a more traditional, less interdisciplinary academic environment.

The diversity of the postdoc group is also really attractive to me. I can feel like I’m in an ecology lab because of interactions with my mentors and their lab groups—but on a daily basis I’ve got sociologists and political scientists and all sorts of other people who have really interesting perspectives on cities sitting in the same office.

How have you used non-traditional science communication methods to engage new audiences in science?

There’s an open streets initiative in Cape Town where whole neighborhoods shut down the main roads to cars on Sunday, and everyone comes out to play in the street. A couple other postdocs and I put on a pop-up stall that had big white boards that read “I’m a scientist; Ask me a question.” People would just walk past and ask us whatever they wanted, and we’d try to answer them. The thing I was surprised by was that adults were very nervous to ask a science question. Younger students showed no hesitation, but their mums and dads and older siblings would just kind of hang around the edge of the circle listening in. When we asked them if they had a question, they’d be in a hurry to respond, “No, no.”

Otherwise, the house I lived in during my PhD hosted “wacky science nights”; we’d just invite over people from the neighborhood and do wacky science experiments. Once we measured the speed of light by disabling the rotation disk of our microwave and heating a big tray of marshmallows. Wacky science nights came to an end when a friend accidentally made a bomb of potassium nitrate and sugar that literally blew up the kitchen.

The National Socio-Environmental Synthesis Center, funded through an award to the University of Maryland from the National Science Foundation, is a research center dedicated to accelerating scientific discovery at the interface of human and ecological systems. Visit us online at www.sesync.org and follow us on Twitter @SESYNC.