Annapolis, MD – Recently published research in PLOS One shows that Marine Protected areas (MPAs) can increase the amount of fish, promote marine biodiversity, and add to a more sustainable fisheries industry. This research emerged from an interdisciplinary socio-environmental synthesis research team at the University of Maryland’s National Socio-Environmental Synthesis Center (SESYNC). The researchers evaluated the effectiveness of different MPA designs, including dynamic, network, and different directional orientations for protecting shifting species under climate change using ecosystem modeling (see Figure 1). " We are at a crucial moment as the world negotiates protecting 30% of the ocean at the Convention on Biological Diversity,” said lead author Dr. Tim Cashion from the Institute for the Oceans and Fisheries of the University of British Columbia. He added that, “Maintaining biodiversity is essential, but how we protect marine ecosystems considering its social-ecological systems will be key if we want to protect biodiversity in a changing world." While MPAs are considered a valuable tool to protect marine species from human impact, ocean warming, acidification, and oxygen depletion from climate change causes many marine species to move in search of cooler waters and more suitable habitats.

The team developed six MPA designs of equal size: four static MPAs including Square, Narrow Vertical, Narrow Horizontal and Network, which stayed in place, and two dynamic MPA designs Square Shifting and Network Shifting, which moved 20 km poleward every 20 years to take into account the shifting nature of marine species affected by climate change. The model differentiated between the Static Horizontal and Static Vertical MPAs because of the expectation that vertically oriented MPAs will be more likely to benefit marine species as they shift poleward due to climate change. This rate of movement may be conservative as current estimates are between 15.5 km/decade and 25.6 km/decade for low- and high-emissions scenarios, respectively.

Effects of Marine Protected Areas for Fish Populations and Fisheries
The modeling results indicated that only the Square Shifting MPA design increased the amount of fish by about 5%. The Network Static and Network Shifting MPA designs had similar overall outcomes. Catches are expected to be about 12% higher under all MPA designs compared to not having an MPA in place. However, even with higher catches, the model predicted revenue to be around 10% lower with a MPA in place because of changes in supply and demand and a greater number of lower-value species being caught.

The modeling did indicate a change in fish ranges at different ‘latitudes’ in the various MPA designs. For many fished species, the introduction of the MPAs did not fundamentally alter the species’ ranges. However, for some species like adult mackerel, the effect of introducing an MPA was dramatic—shifting where they live to almost solely within the MPA areas regardless of design. When comparing the Static Vertical and Horizontal MPAs, most fish populations were heavily concentrated in the ‘northern’ latitudes in the horizontal MPA, but more evenly distributed in the Vertical MPA scenario. When comparing the Square designs to the Network designs (Static and Shifting), the Network designs had higher fish population levels in the southern ranges than the Square designs. 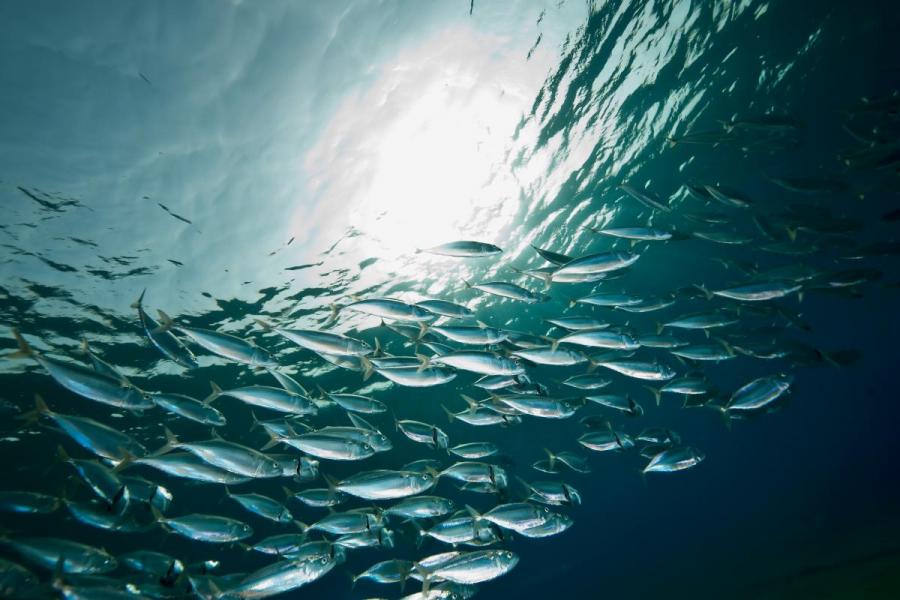 Marine Protected Areas Designs and the Effects on Specific Fish Species
“We found that there are winners and losers for different species and fisheries under the combination of MPA and climate change effects” said Tu Nguyen, currently an Ocean Nexus Fellow and co-author of the study. The research showed that spillover effect of increased catches adjacent to MPAs is observable for those species such as whiting that thrive within the MPA.  However, predator-prey interactions for some species, such as shrimp, may be negatively affected due to the protection of their predator, whiting. Anchovy and whiting were the two groups that benefitted the most compared to the no-MPA scenario under all MPA scenarios with average increases in the amount of fish of 26% and 28%, respectively. The non-network scenarios appeared to generate more extreme positive outcomes for anchovy, whiting and whales, while they generated larger negative outcomes for mackerel and shrimp. Dr. Nguyen concluded that “We show that there will be no silver bullet in terms of design; however, our model suggests that having a functional MPA established is more beneficial to both society and biodiversity than a scenario where no MPAs are present.”

Marine Protected Areas Should Be Designed with Specific Goals in Mind
The results suggest that there is no one optimal solution in the face of climate change, but different MPA designs could potentially bring about regional benefits in terms of increased amount of fish and catch. Shifting MPAs may be a good first step for protecting a variety of fish under future ocean warming. In general, MPA managers must anticipate the effects of released fishing pressure and species' interactions on the goals of their MPA. In the face of a changing climate, research that models the potential trade-offs of MPAs for sustainable fisheries management remains relevant on local and global scales. Dr. Talya ten Brink who works on marine spatial planning and is a co-author of the study expressed the importance of the team’s work. “We believe our work can inform current discussions on expanding ocean protection in the global ocean.”

This work was supported by the National Socio-Environmental Synthesis Center (SESYNC) under funding received from the National Science Foundation DBI-1639145.

About SESYNC
The University of Maryland's National Socio-Environmental Synthesis Center (SESYNC) in Annapolis brings together the science of the natural world with the science of human behavior and decision making to find solutions to complex environmental problems. SESYNC is funded by an award to the University of Maryland from the National Science Foundation. For more information on SESYNC and its activities, please visit www.sesync.org.