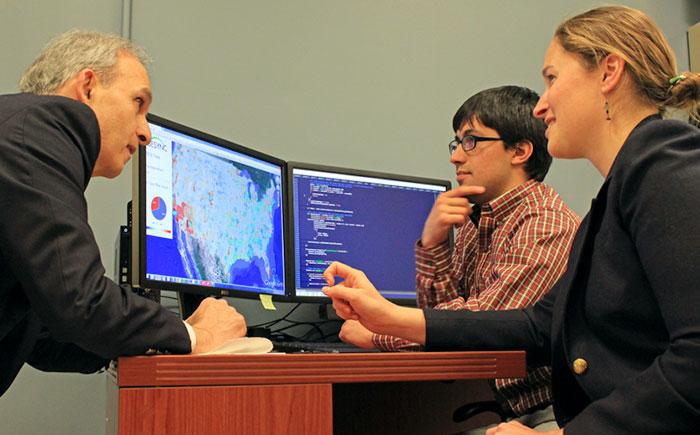 The journal Environmental Research Letters announced earlier this month (March 16) that they have selected an article supported by the National Socio-Environmental Synthesis Center (SESYNC) as the ‘Best Article of 2016.’

The article, “Linking ‘toxic outliers’ to environmental justice communities” found that the worst-of-the-worst industrial polluting facilities, or “super polluters,” are located close to low-income communities and people of color. The study looked at data from the U.S. Environmental Protection Agency and found that these “super polluters,” which account for 90 percent of toxic chemical pollution, are disproportionately exposing minority and low income communities.

Dr. Mary Collins, an environmental sociologist at the State University of New York College of Environmental Science and Forestry, led the research while a Postdoctoral Fellow at SESYNC at the University of Maryland. Dr. Collins and her co-authors, Joseph JaJa, Professor of Electrical and Computer Engineering and the Institute for Advanced Computer Studies at the University of Maryland, and Ian Muñoz, formerly of SESYNC, did the analysis as part of the Disproportionality, Inequality, & Vulnerability in Socio-Ecological Systems science team.

Dr. Collins used SESYNC’s computational resources to overlay EPA data on polluters across the U.S. with demographic information from the U.S. Census to find that found that high minority and low-income communities are impacted to a substantially greater degree by super polluters.

The article was awarded Environmental Research Letters' ‘Best article of 2016’, voted for by members of the Editorial Board. The journal highlights the “most innovative ground-breaking articles” published every year, but this the first time they have awarded a ‘Best of’ prize in their annual highlights.